On Friday 8/29/14, CMS published the long awaited final rule on MU flexibility in 2014. Unfortunately for many providers, the special reporting options will not be available to all organizations, and the rule offers no relief at all for MU requirements in 2015 and beyond.

There are currently two editions of EHR Certification Criteria that have been adopted: the 2011 Edition and the 2014 Edition. Note, the 2015 Edition has been proposed, but it remains voluntary. Starting in 2014, all providers, regardless of MU Stage, were required to have 2014 Edition Certified EHR Technology (or “CEHRT”). Stage 1 objectives and measures were also changed slightly between 2013 and 2014, largely to accommodate the new 2014 Edition software that was expected to be in place. [For the purposes of this Editorial, we will refer to these differences as the “Stage 1 (2013 requirements)” and the “Stage 1 (2014 requirements).”]

Unfortunately the transition to 2014 Edition software did not go well and included widespread and well-documented problems related to certification and implementation. As a result, on Friday CMS and ONC finalized their proposal to delay Stage 3 until 2017 and offer certain providers flexibility around which edition of CEHRT they can use – and which Stage of MU they can attest to – in 2014. 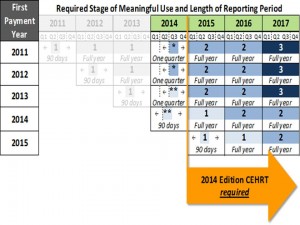 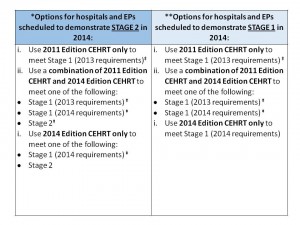 Definition of “Delays in CEHRT Availability”

The flexibility finalized for 2014 will not be available to all providers. CMS reiterated in the final rule that only hospitals and EPs that are “unable to fully implement 2014 Edition CEHRT due to delays in 2014 Edition CEHRT availability” will be able to attest using the special reporting options.

The “delays” must stem from issues related to software development and testing, the certification process, or the release of the product by the vendor. For example, an organization that did not have enough time to train staff and implement new workflows because their EHR was only certified last month will qualify; as will a provider who is still waiting for an upgrade or patch from their vendor so that the EHR can function properly. A hospital that could not implement 2014 Edition CEHRT because they waited too long to reach out to their vendor or an EP who voluntarily elected to hold off on testing will not be able to take advantage of the flexibility though.

CMS also clarified that with one exception, an inability to meet a specific MU measure (for reasons unrelated to delays in product availability) is not a sufficient reason to use one of the special reporting options. For example, a Stage 2 hospital could not choose to attest to Stage 1 (2014 requirements) simply because it cannot get enough patients using the portal to meet the Stage 2 “view, download, and transmit” measure.

The exception – and it is an important one – pertains to the second Stage 2 summary of care measure (electronic transmission of a summary of care document for more than 10% of transitions). Stage 2 hospitals or EPs who are unable to meet this particular measure in 2014 specifically because their trading partners were impacted by CEHRT availability delays and thus are unable to receive a summary of care document electronically, will be permitted to attest to Stage 1 (2014 requirements) instead of Stage 2. However, CMS stressed that providers choosing this option will need to retain detailed documentation that clearly shows the CEHRT problems that their trading partners were facing.

Overall, CMS provided a number of scenarios in the final rule that will not qualify as “unable to fully implement 2014 Edition CEHRT due to delays in 2014 Edition CEHRT availability.” To summarize, the following examples are not sufficient reasons to use one of the special reporting options: