With the release of the 2018 MIPS/MACRA “Proposed Rule” there are a number of changes that will likely become law in the near future.

While many have commented on the complexity of the rule, the short timelines for implementation, and the increased burden on providers–in this blog post we’ll be offering a different perspective. Namely viewing the MIPS/MACRA legislation through a long-term lens, and forecasting what this might mean for providers in 2028, rather than 2018.

To do so, I’d like to introduce a concept we call the “Competition Curve”…

Let’s assume that all the Eligible Clinicians (ECs) for MIPS perform according to a normal distribution. If so, their cumulative MIPS performance score might look something like this:

And now let’s consider what may happen as MIPS/MACRA evolves, and assess the impact of the 2018 proposed rule, and CMS’ stated goals for the program.

APMs and especially Advanced APMs put providers at financial risk for poor clinical outcomes. Therefore it seems safe to assume that “high performing” providers and groups will be the ones most likely to migrate toward APMs: 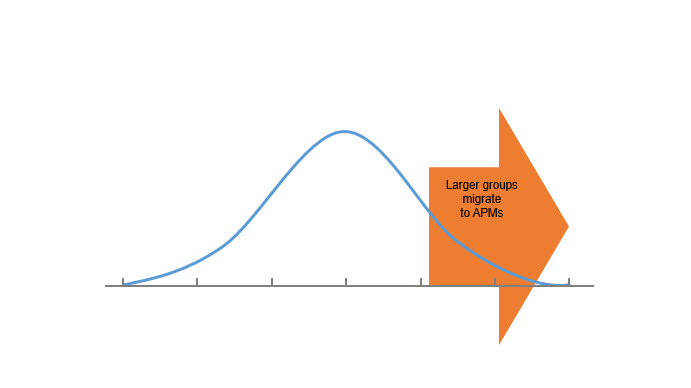 In the 2018 proposed rule, the thresholds for participation are eased. For 2017, if an Eligible Clinician saw fewer than 100 Medicare Part B enrolled beneficiaries, or if they billed fewer than $30,000 to Medicare Part B, they were exempt from MIPS reporting.

With the 2018 proposed rule, the thresholds were eased. Now, clinicians are exempt if they see fewer than 200 patients, or bill less than $90,000.

This is a significant change, and CMS now estimates that a third of all Eligible Clinicians will be exempt due to being underneath the thresholds. 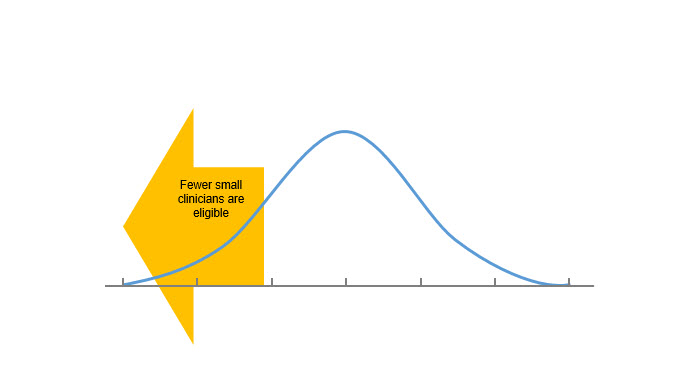 Budget Neutrality and the Competition Curve

Essentially, clinicians participating in MIPS are by definition in competition with each other.

Furthermore, we’ve seen that over time the high performing clinicians will be migrating to APMs, and low volume clinicians will not be required to participate. This will “compress” the competition curve, and make it increasingly difficult for high performers to distinguish themselves. Furthermore, small changes in an Eligible Clinician’s MIPS score may have significant impact on their reimbursement rates. 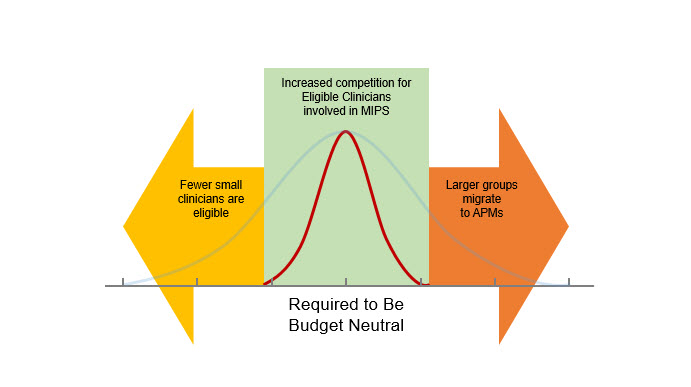 Recommendations for the Future

CMS can (and is likely to) evolve MIPS/MACRA over time in future rulemaking. Yet it seems clear that the shift from “Volume to Value” will continue, and that CMS will continue to promote AMPs and Advanced APMs for Medicare Part B participants. With this as a foundational assumption, here are our recommendations for staying ahead of the “Competition Curve”:

Migrate to APMs and Advanced APMs as soon as possible

There are significant benefits to Advanced APM participation, not the least of which is an automatic 5% increase in Medicare Part B payments. Additionally, Eligible Clinicians who are Qualifying Participants (QPs) in APMs are exempt from reporting to MIPS.

Consider joining (and submitting MIPS data) as a group

Groups (multiple Eligible Clinicians billing under a single Tax ID Number (TIN)) are able to attest to MIPS using composite scores for all ECs in the group. This helps “buffer” any individual clinician’s risk, and may increase the likelihood that the overall group will score well. Additionally there are some scoring benefits in the MIPS calculations for groups that can help improve a group’s overall MIPS score.

Consider participating (and submitting) as a “Virtual Group”

For solo practitioners and clinicians in groups of 10 or fewer, CMS is proposing beginning Virtual Groups in 2018. This serves as a way for individual TINs to “virtually join” and pool their scores. They will be required to report as a group, but most of the benefits afforded to groups by CMS will be extended to Virtual Groups as well. While the specifics are not yet fully available from CMS, ECs in solo and small group practices should be discussing this now and developing a strategy for moving forward in order to take advantage of these benefits, especially if they are on different EHRs as there likely will be complexities associated with aggregating data from disparate systems.

Clinicians should stay aware of their interim MIPS reports during each performance period, and look from strategies and workflow adjustments that will help maximize their MIPS scores. With the compression of the Competition Curve, small changes in MIPS scoring may have profound impacts on provider reimbursement in the future. Successfully clinicians will be the ones that are best able to optimize their MIPS scores during each performance period.

Perhaps most importantly, Eligible Clinicians should stay engaged, and be aware of any CMS proposed changes, and should comment on any proposed rules. CMS does read and respond to submitted comments, and it is the best way for ECs to influence future regulations.

The potential impact of MIPS/MACRA and the move toward APMs represents a significant change in how clinicians will practice medicine, and how they will be reimbursed by Medicare. Clinicians should make understanding any legislative changes a priority, and will need to proactively plan for how best to position themselves and their practices in the future as our healthcare landscape evolves.